About your host – Carbon Farmers of Australia

The Principals of Carbon Farmers of Australia have been pioneers in the carbon farming industry. Experience counts.

Louisa obtained her Bachelor of Agricultural Economics from the University of New England. She worked in the market research industry as a field supervisor while bringing up her 3 children. In 1991- 2003 Louisa and husband Michael established and grew a city based Marketing agency from zero to 55 employees. In this business, she was Director and  General Manager of Boomerang! Integrated Marketing & Advertising.

Intent on following her first choice of career, she studied for the Advance Diploma of Farm Management at Sydney University (Orange), trained in Holistic Management, and from  1998 to 2017 she was a woolgrower in the Wellington NSW district. Growing fine Merino Wool.

She was selected by the Central Western Catchment Management Authority as one of 10 highly innovative landholders in the Catchment, to be trained in farm planning and soil restoration. Through this training she and husband Michael became convinced that soil carbon could solve many agricultural, environmental, and climate change problems.

She co-founded the Carbon Coalition Against Global Warming in February 2006 to lobby for the right of Australian landholders to trade on the emissions offset market the credits they can earn by sequestering carbon in their soils. They have since travelled throughout Australia and the United States meeting scientists and farmers and spreading the word about “Carbon Farming”.

Seeking to build bridges with the scientific community, she organised two Soil C Summits between Scientists and Farmers, in Dubbo  and Orange NSW.  She organised and ran the world’s first Carbon Farming Expo & Conference in Mudgee in November 2007 and the second and third  in Orange in 2008, 2009 with delegates from every State in Australia and NZ. 2019 marks the 9th Carbon farming conference and Expo, which is now incorporated into Carbon Farming Week,

In 2008 she was invited to be a delegate at a Climate Change and Conservation Farming Conference in LaFayette, Indiana, organised by the UN Food & Agriculture Organisation. She was also a delegate at the National Carbon Offset Coalition Conference in Boezman, Montana. She is co-founder of Carbon Farmers of Australia – a not-for –profit trading arm of the Carbon Coalition. It has developed a trading model for soil carbon which gives farmers access to markets before the formal Emissions Trading Scheme begins. It has also published the world’s first Carbon Farming Handbook.

She has developed the “CarbonCredited™” brand for wool and is currently recruiting woolgrowers into this emissions reduction program.

Louisa has been recognized for her work by being chosen as runner up in the 2008 NSW Rural Woman of the Year. She has also been appointed to the Regional Development Australia Committee – Orana Region. This intergovernmental committee has been set up to ensure the future strength and development in Rural and Regional Australia.

In 2011, she established the Carbon Farming and Trading Association, in order to be able to represent farmers in the new carbon trading environments.

As director of Carbon farmers of Australia, she is part of a consortium of 3 companies which developed the first Soil Carbon methodology which was submitted to the Carbon farming Initiative process.

Carbon Farmers of Australia has been active in the Carbon Trade in Australia since the beginning, now with close to 200,000 hectares under Government Contracts within the ERF (Emissions Reduction Fund)

They have also traded in the Secondary Market in Australia. 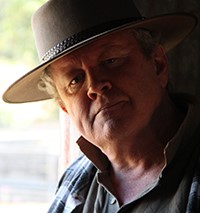 Prior to moving to the country, Michael forged a creative career in Marketing for 30 years.

He holds both the Certificate and Diploma of Direct Marketing from the Australian Direct Marketing Association (ADMA). Michael was creative director of a large agency, as well as a regular conference speaker, a lecturer and workshop facilitator for many organizations. He has been a judge for many marketing awards programs. Michael was editor of Marketing magazine for 10 years and is now executive editor. He was founding chairman and managing director of Boomerang Integrated Marketing and Advertising. He was inducted into the Australian Direct Marketing Hall of Fame in 2001.

Having moved to the country, and realising the huge challenges Agriculture faces, he set about using his skills to research all issues Concerning Farmers and Climate Change. He is now an Agriculture Climate Change Consultant and educator.

In this role Michael & Louisa are woolgrowers from the Wellington district of NSW and Convenors of the Carbon Coalition Against Global Warming, a farmers’ and citizens’ movement which aims to have soil carbon recognised as a major solution to Climate Change. They are also principals of Carbon Farmers of Australia a company that will aggregate and sell soil carbon credits. They have been delegates at many high level symposia in Australia and the USA. They led a fact-finding delegation to the USA on behalf of Australian farmers in 2006. While there, they negotiated the first order for soil carbon credits from the Chicago Climate Exchange. Michael recently appeared as an expert witness before the NSW Premier’s Greenhouse Advisory Panel and the NSW Department of Primary Industries Climate Risk Management Project.

Yearly over 8 years, Michael and Louisa have organized and conducted the World’s only Carbon Farming Conference and Expo, attracting 350 delegates from all states of Australia and also New Zealand.